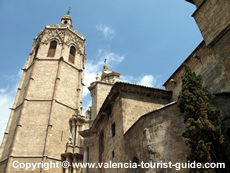 Valencia Cathedral
Throughout the year in Valencia there are important dates where festivities take place in the city. This page will provide you with details of the main events in Valencia. It is important to remember that this page deals specifically with dates that relate to Valencia - there will be other dates (like Christmas) when further festivities will take place.

San Vicente Martir was a young deacon who was martyred in Valencia by a Roman emperor in the year 303. He has now been named as one of the Patron Saints of the City. On the morning of the day of the feast there is a procession dedicated to him. The procession begins and ends at Valencia Cathedral.

The Fallas is one of Valencia's biggest events of the year. It officially starts when there is an explosion in the square in front of the city hall to mark the start of the festival period. There are a number of different events that occur leading up to the main events. These include paradas and loud firework bangers which are let off outside the main city hall.

You can obtain a program of the events by following the link below.

Following these opening events, figures or sculptures known as 'fallas' are constructed all over the city. These are giant caricatures of local, national or international figures (they could be anybody from an ancient god to Barack Obama!). All of this is leading up to the main events of Las Fallas.

At midnight of the last day of the festival, the fallas are set alight - creating a dramatic scene across the city. This day is known as El Dia de San Jose and the burning symbolises an act of purification of the city.

For full details of the programme of the event and where to head for different parts of it, see the Official Las Fallas Website.

In Valencia Easter Holy Week is known as Maritime Holy week (Semana Santa Marinera). This runs form Palm Sunday to Easter Saturday. It is celebrated in the maritime towns of Valencia with processions, traditional music and bell-ringing.

On Easter Saturday there is a particularly interesting event, when, at midnight, the church bells ring and people who live in the neighbourhood throw pots of mud from their windows. This is an old tradition known as Trenca de Perols.

For full details of the schedule of events during this week, see the Official Semana Santa website for Valencia.

San Vicente Ferrer is the Patron Saint of Valencia. Following Easter, each year children re-enact the miracles of Sant Vicente Ferrer at thirteen different points around the city.

Our Lady of the Forsaken is another Patron Saint of the city.The celebrations take place on the second Saturday and Sunday of May.

On the night before the fiesta there is a concert in the Plaza del Virgen in the old town and a firework display along the old Turia riverbed.

Throughout the Sunday of the fiesta masses are held, starting with an open-air mass. You would need to be a very early bird for this first mass!

In the afternoon of the fiesta there is a procession that takes place through the old town and petals are scattered in the streets.

The first July Fair was held in 1871 on 21 July. Since then it has grown each year, so that it now lasts for a whole month. It began with pavilions, botanical exhibitions and the sale of local products.

One of the most famous events at the fair is the 'battle of flowers'. This is when a battle takes place on the last Sunday of the festival with women throwing flowers from floats that pass through the streets of the city.

To find out more specific details about the full schedule for the different events (both free and ticketed) taking place during the month of July, keep an eye on the Official Valencia Turisme website as the date of the vent approaches.

This is the day when the people of Valencia commemorate the day in 1238 when King James 1 officially entered Valencia and freed it from Moorish rule. On this day festivities take place throughout the city.

This day is also the Valencian equivalent to Valentines day. In this day men give women a 'Mocadora' - a bundle of marzipan sweets wrapped in a handkerchief.

Throughout the year in Valencia interesting festivities take place. Before you book your trip to Valencia, check out whether there might be anything particularly interesting going on during your trip.

Back To The Top Of The Page